Last Saturday we were enjoying the beautiful weather and all the goodness that is a busy Saturday. As I was walking over for a late lunch I looked into the pasture and stopped in my tracks. I saw bees flying. A bunch of bees. I’d seen this once before and not known it was a swarm. This time I was older and smarter. I stopped and checked to see where the swarm was heading while simultaneously texting Jennifer with Buck Naked Farm “Swarm at my place!” I grabbed Spork and pulled him into this, while I hoped that the bees would go to the tree they seemed to be meandering towards. About 10 minutes later, the bees had settled onto a high branch in the tree and Jennifer had texted she’d be here in 15 minutes. Since she lives 15 minutes away, that’s a pretty stunning response. That was 15 minutes from when I texted her originally. A swarm is a big deal!

I tried to use our bucket truck but we’d broken something inadvertently while fixing it that week which I didn’t realize till I tried to raise the boom. Oh well, plan B. 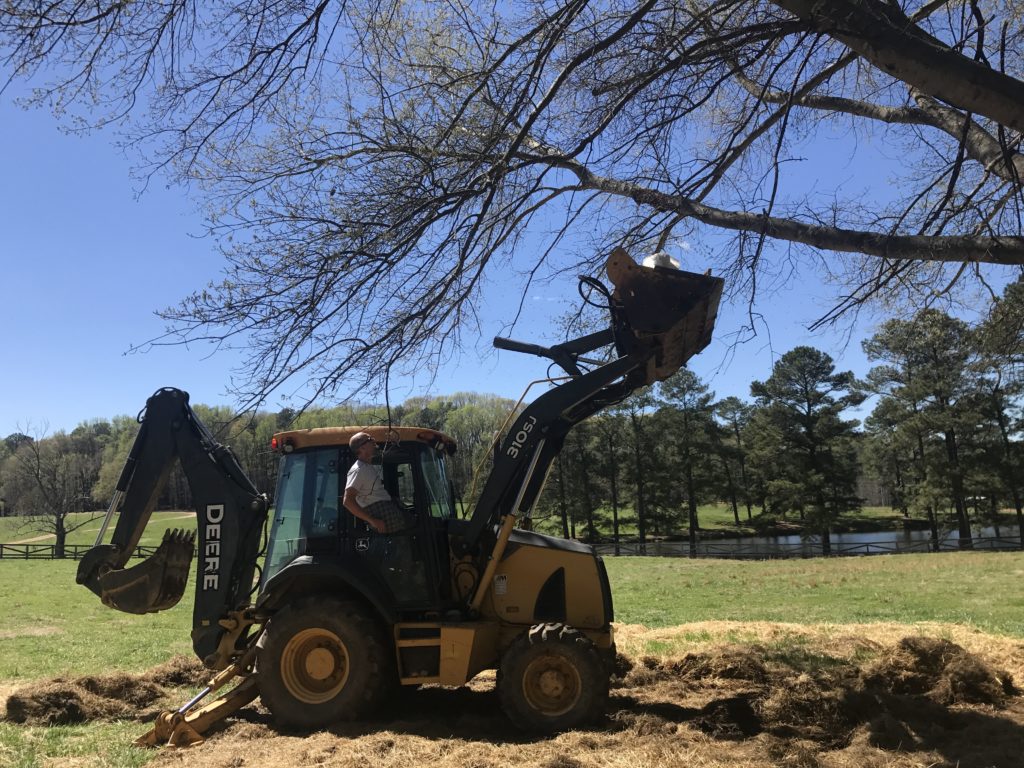 I went and grabbed the backhoe and pulled it into place while Jennifer was gearing up in all her bee paraphernalia. We had a funny moment as we were both quickly and professionally setting up when Jennifer looked at the backhoe, then looked at me and said, “Who’s going up in the bucket?” Since she was wearing all the bee gear, and I was garbed in a t-shirt, shorts, and flip-flops I kinda assumed she was going up. However my response was, “Can you run the tractor?” “Um, no.”  “Then I guess it’s you going up.”

This is important, because Jennifer is afraid of heights. Like, a lot. However that swarm wasn’t going to get itself so she steeled her courage and hopped into the bucket. You’ll note in the picture that I’ve put down the rear stabilizers so that there was no wobble in the tractor as she moved around. That and moving very slowly was the best I could do.

When you capture a swarm, the way it works is the bees all cluster around the queen and hang out while the scout bees go look for a new home. The swarm is very docile during this period so it’s just a matter of getting under the swarm with a box, and then brushing the bees into the box. No bid deal as long as you don’t mind 20,000 bees falling into your lap.

Then you check to see if the queen made it into the box. If so, you simply wait because the rest of the bees will eventually work their way into the box to be with the queen. Simple.

After brushing the first batch into the box, Jennifer checks for the queen. luckily we got her the first time so this one was easy.

Btw, as an aside, as Jennifer is up there in all her gear. I’m standing on the hood getting this video, in the previously mentioned flip-flop attire. Yes I did get stung. Yes, I need sympathy. The things I do for you folks.

Jennifer was very happy to be back on the ground with a captured swarm. I’m not sure if the ground was the highlight, or the capture. Either way, she was pretty happy.

Swarms are not good for a beekeeper. It means that the remaining hive will not have any real production that year. However swarms are a result of having a really good beekeeper. They are a sign that the hive is doing well. In fact the bees are doing so well that they decide that they should split in half and make two hives. That is what a swarm is, it’s reproduction, almost like a cell dividing. It’s natural and a good thing.

By capturing the swarm and giving them a new, safe, warm home, we haven’t lost production, we’ve gained another hive. Neither hive will have much production individually but having both is a net gain. Couple that with the package bees Jennifer had already ordered, and we have a very active bee yard this year, which is great because we are powering through the honey in the store. I had to do an emergency order with Jennifer because we were out of our big honey and almost out of our mediums. I didn’t realize we sold so much.

It was a pretty cool afternoon. The only downside was the bucket truck not working, but Miguel fixed that the next week so all is good on the farm.

2 Replies to “Capturing a swarm, the ninja way”