Our momma and baby cows spend most of the grazing season at a farm that we lease near our farm. Usually we like to leave the cows at that farm till late October to early November but we’ve been short on grass over there this year and this week we received a call from our property owner that the cows were out. Fortunately our landlord, despite being a successful doctor now, grew up as a farmer. He had the cows back in before we could even get there.

One way to make your landlord your ex-landlord is to have him chase your cows with any frequency. We love our landlord so we try to make his life as easy as possible. Regardless of how much grass was left (not much) we decided to go ahead and bring the girls back here and start prepping for winter feeding.

We still have a weeks worth of grass here (with everyone present), maybe a bit more. We’ll graze the rest of what we have, then start feeding hay and produce instead of grass and produce. That will last till April of 2018. That means we are going to have an expensive winter but some of that time they’ll be getting grass, hay, and produce so it all balances out.

Yesterday we took the trailer, truck, backhoe, ramp, and everyone who was present to our leased farm to haul cows. The process is we start about a week prior feeding produce near or in our portable corral. The cows love the produce and they’ll happily walk into the corral to eat it. After about a week, they have the habit down and on moving day we simply bring one load of produce, drop it in the corral, and everyone walks in. Close the gates and viola!

Except it didn’t work that way, of course. The cows had already wandered off by the time we got there so we took the produce and drove across the farm to lure them back. Once we had them back, we dropped the produce and closed them in. Yeah! Success!

That’s when Vicente noticed that they weren’t all in there. A few minutes later some of the younger cows came wandering up. We opened the corral and they scurried in to be with mom. Ugh. Kids! Always late, always causing trouble.

Then a couple more wandered up. We scooted them inside as well. Stupid kids, why wouldn’t they listen and come with mom when called.

Then three more wandered up. By this point the food in the corral was running low which means the moms are ready to go back out. That means we can’t just simply open the gate because now somebody will come squirting out. Also, one of the young cows was obviously not going to behave. You could see it in how he acted immediately. We chased these three cows all over the woods and they went everywhere and anywhere except where we needed them to go. Why is it always the kids who cause the trouble? The moms I could just about verbally tell what to do and they’d do it.

Teenagers, there is a lesson here. Sometimes you are too smart for your own good. We were trying to move the cows back to food, water, and comfort, and these knuckleheads were stopping the process.

So after several attempts we finally got the cows in the corral and loaded onto the trailer. But not before a whole gaggle of young cows couldn’t figure out how to get onto a trailer and blocked the ramp entrance with their idiocy. Once again, the moms had walked right on. The kids were clueless. We walked a mom back off, then walked her back on to show the dummies how it was done. Then we pretty much just pushed the young ones on the trailer because they still didn’t get it. 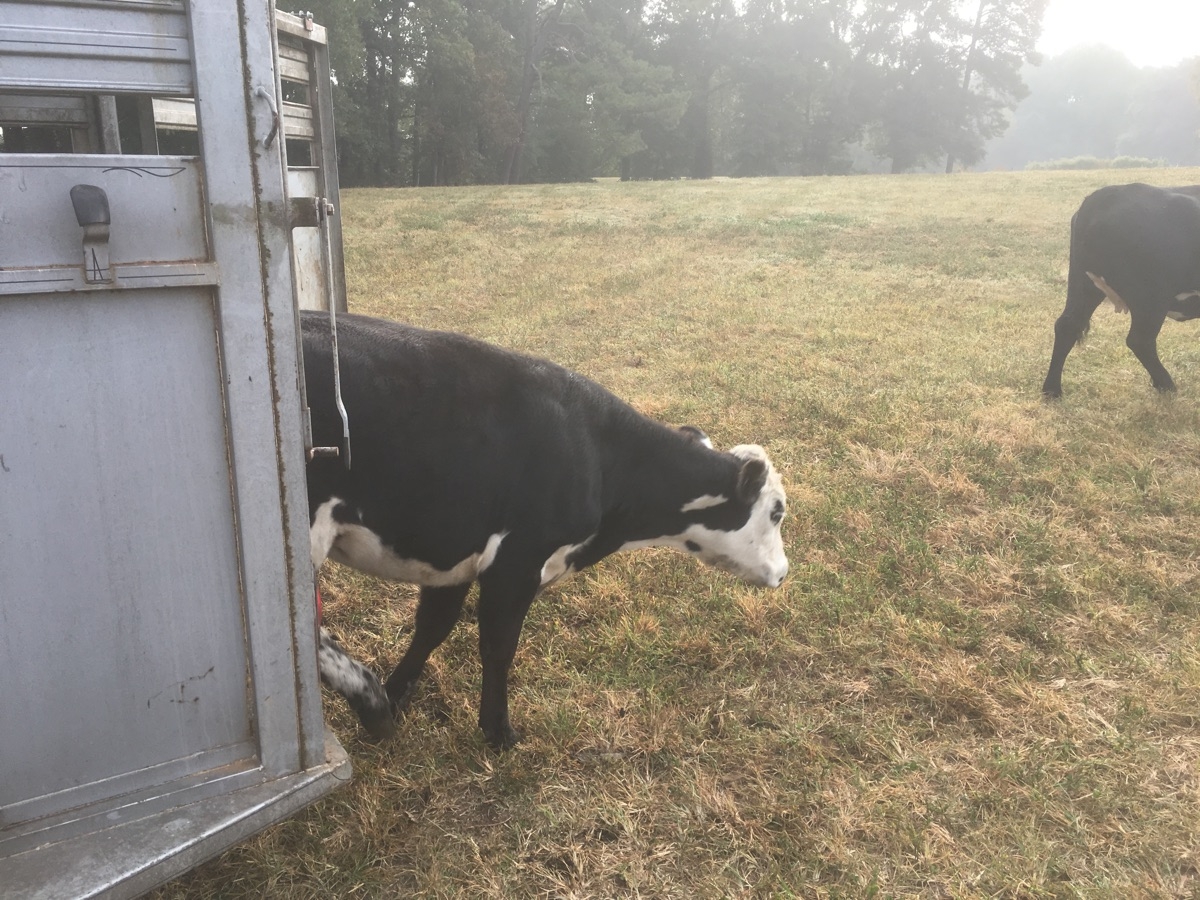 Once we had a trailer load of cows we’d drive the five minutes to our farm, back into the pasture, and simply open the gate. The cows hop off and realize they are back home. They immediately go over to see all the other cows already here and have a big running around party. There is some pushing and shoving as the pecking order is reestablished. You can almost hear the, “Mom’s home!” from the cows as they assert their roles as herd leader.

We took 30 cows to our leased farm last time we offloaded this summer. We brought back 33.

It’s nice to have everyone home.