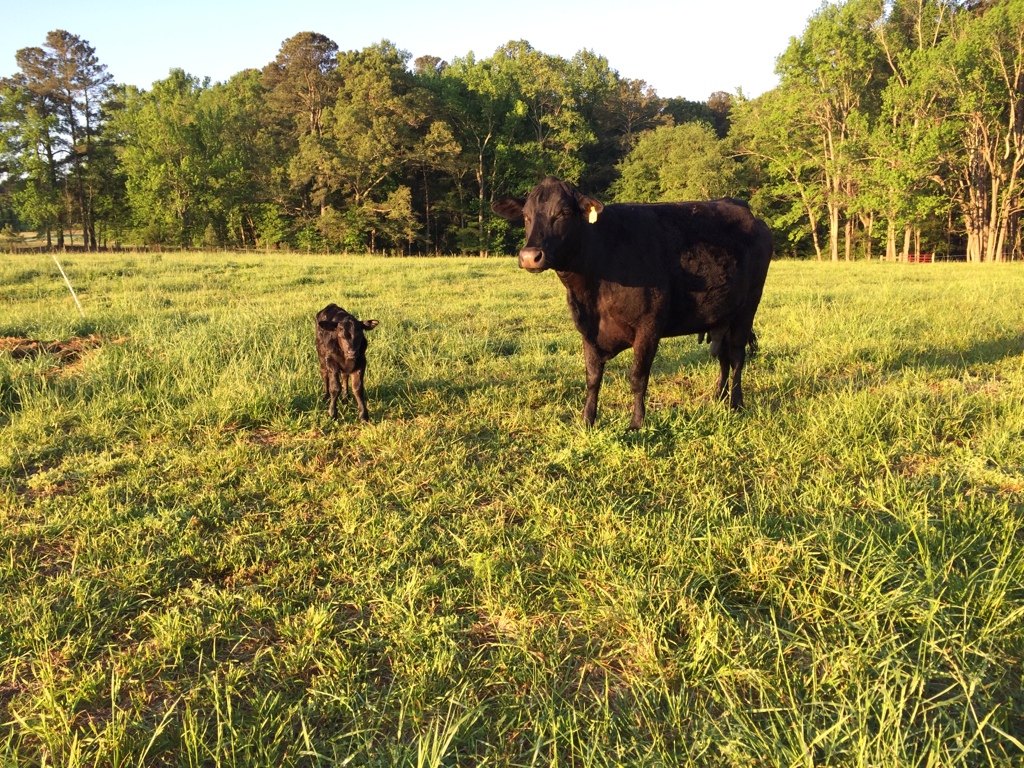 This morning when I moved the cows I found Curious had dropped a beautiful little bull calf. The calf is up and moving about and we’ve already tagged him, #32. Normally we get higher and higher in numbers but 32 had been missed accidentally previously. SWMBO has informed me that we already have a name picked for our next bull calf so this one will be named Boyd. (Hello Boyd and Ava!)

Curious is a pure black Angus and so is the dad, Benjamin. I was planning on castrating this little calf but Spork pointed out he would make a good bull. Benjamin is already having his first year of calves so in two years when this little calf is ready, Benjamin will be ready to sell so based on Spork’s advice we are going to leave this little bull uncut and see how he develops. If he looks and acts right he may be our next bull. If not, he might be someone else’s next bull. Either way all he received today was an earring.

We had a visitor this weekend, Miss Katie, and of course we took her out to see the new calf. We walked the paddock twice, a group of 5 of us, and we didn’t see the new calf anywhere. Just when I wondered what had happened to the calf, Katie looked over and found him in the grass outside the paddock. Leave it to the new kid to be the calf whisperer.

With no mom around everyone was able to take a turn petting the new calf. You can only do this for the first day or so. After that the calves will run away if you approach.

We had enough time with the new calf that we were able to get some video of the kids and the new calf. Too cute.

Also this morning I took some of the kids fishing. Bok Bok and I fished first, then Spork and I took the paddle boat out and did some more fishing, after a stint on the bank.

So after feeding the animals, taking the kids fishing, planting 54 tomato plants, and various and sundry other things I worked on today, I was fairly hungry at 2pm. After working 6 days a week for me, Miguel decided to save my day by bringing me a kit for home-made chilaquiles (it’s pronounced like Chilli-keel-As). I’ve had these in a restaurant before, they aren’t much to talk about. Miguel’s however? Oh man are they good. After this huge plate of food, I wasted the rest of the afternoon with a big siesta which I much enjoyed. Now the sun is going down and I’ve already slept too much. I guess I’ll put the kids to bed and maybe head back to the shop to work on the apple press. It’s too nice to stay inside for long.

All in all, a pretty nice Sunday.