Anyone who visits regularly knows that we deal with a lot of wood chips here on the farm. We are a dump site for the tree service companies in town, where they can dump their wood chips rather than taking them to the land fill. This saves the environment, the tree service company some money, and gives us fresh organic mulch to use wherever we need on the farm. It has been a great system for the past several years and we have tens of thousands of yards of wood chips here to work with wherever we need. We’ve only ever had two problems. One guy backed into our gate, smashing the gate and the expensive controller. We fixed that and all has been well, until this week.

I’m in my office and hear one of the chip trucks rumble by. Then several minutes later I hear a horn blowing, beep, beep, beep. There is no good reason for the horn to be blowing, especially at 7:30 in the morning, unless something is wrong. I jump up and head out to see what is wrong and discover this. 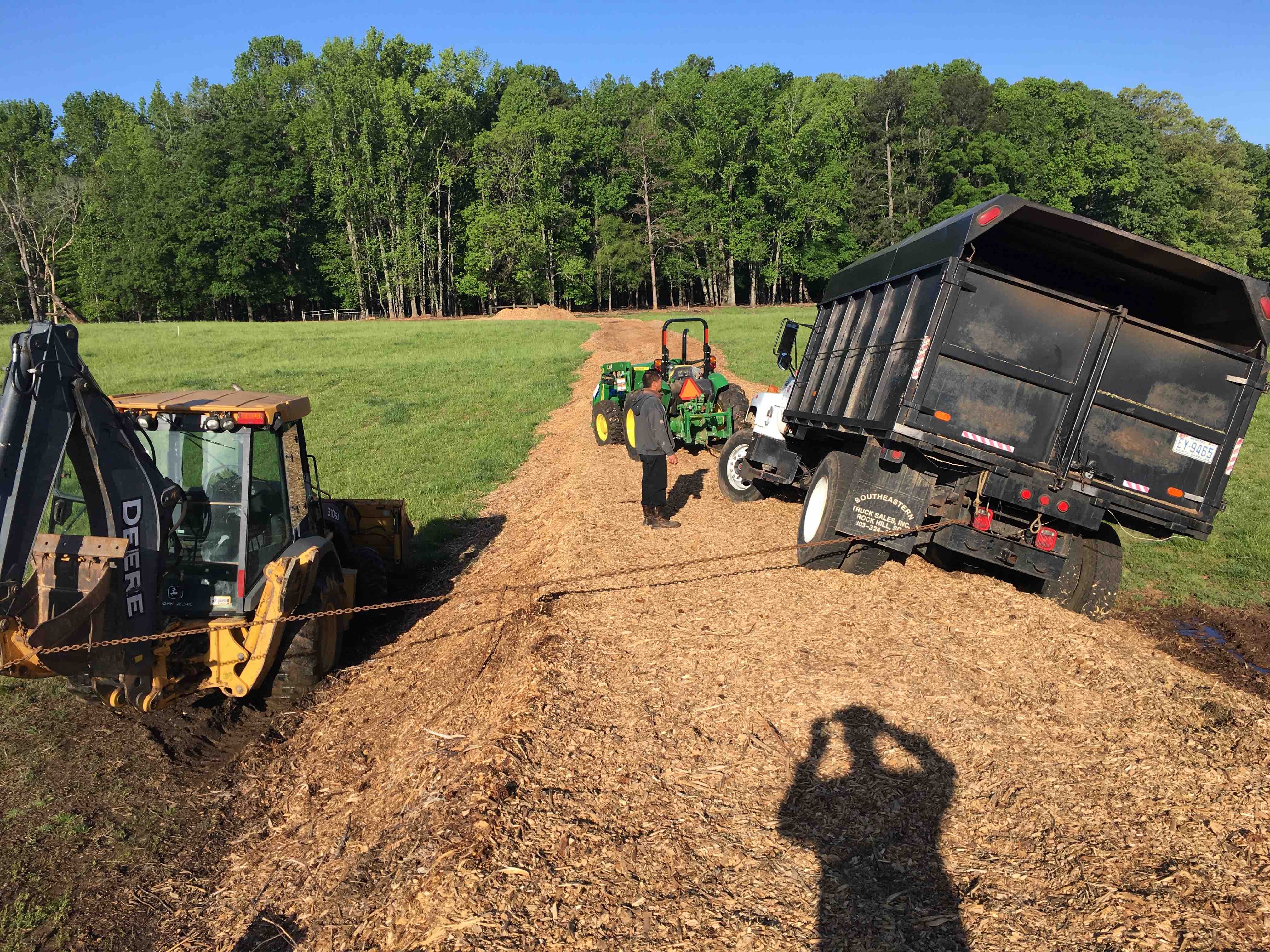 Well not exactly this. There were no tractors with chains, keeping the truck from falling over on its side. We quickly grabbed both the backhoe and the farm tractor and hooked them to the truck to secure it from rolling. This allowed the two guys inside to carefully slide out as prior to that they were afraid to move or change the weight in case it might tip. Based on how it was wobbling, they’d made a good choice.

Once we had the chains secure, and the tractors well in place, we tried giving the truck a tug forward to see if we could get it headed back uphill. It only slid farther. I looked at the hapless driver and explained a few things:

The two guys started slowly shoveling the chips out of the truck. Vicente tried to jump in to help, but we were already down one man with Miguel sick that day. We don’t get paid to shovel chips so as harsh as it seems, I needed him doing farm work. The chip guys could handle their own chips.

Eventually another crew showed up, along with the Jefe who seemed a great guy. By this point I did have Vicente back because we brought another tractor down, our full complement. The tree guys dug all the chips out of the truck, then dug the tires down to somewhat level the truck, digging out the high side tires. During this time, SWMBO called me and asked if I was ready to go? I was supposed to take her plant shopping for her Mothers’s day present. It went like this.

“Hi Honey. Are you ready to take me shopping?” she said happily.

“Look out the front window.”

“Look out the front window, into the pasture. What do you see?”

“Does that answer your question?”

“Yeah, but it is going to be another hour.”

Sorry, even moms have to wait for stuff like this. 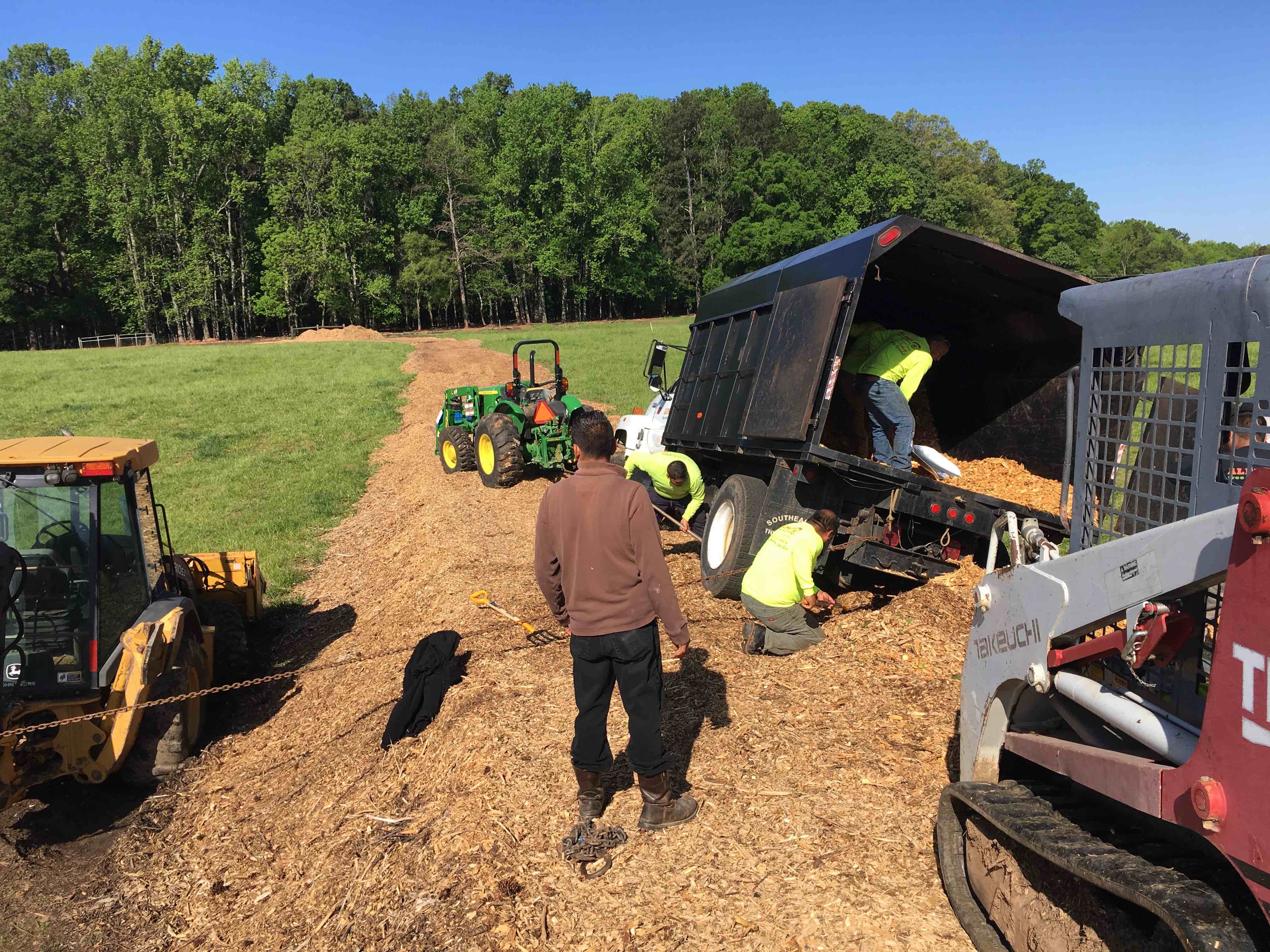 Eventually we had all three tractors, with chains attached to the truck. We used the green tractor to apply upward pressure to the front end so it wouldn’t slide off. The backhoe was used to keep the truck from rolling, and the skid steer was used to pull backwards and hopefully uphill.

The skid steer just couldn’t get enough traction in the wood chips. We tried several ways and it was a no go.

By this point there were about 8 Mexicans working around the truck and the Jefe was doing all the directing. I was simply running the backhoe. Not my circus, not my monkeys. After some more digging, and some conversation in Spanish that I didn’t follow (I can order a taco or a beer, that is about it) the entire group decided that we were instead pulling the truck forward with the green tractor. That was a great idea, except nobody told the gringo in the backhoe. I quickly figured it out and was able to follow along as we pulled the truck back onto level ground so it could continue on its way.

Vicente did some quick work with the skid steer to dress the road back into a level path and I took mom out for Mother’s Day shopping, only about an hour late.

One Reply to “Humpty dumpty fell off the wall, almost”