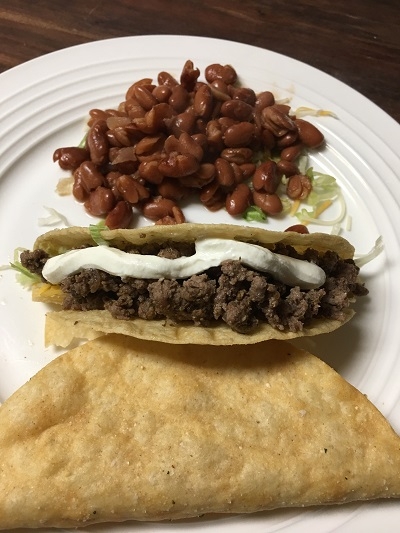 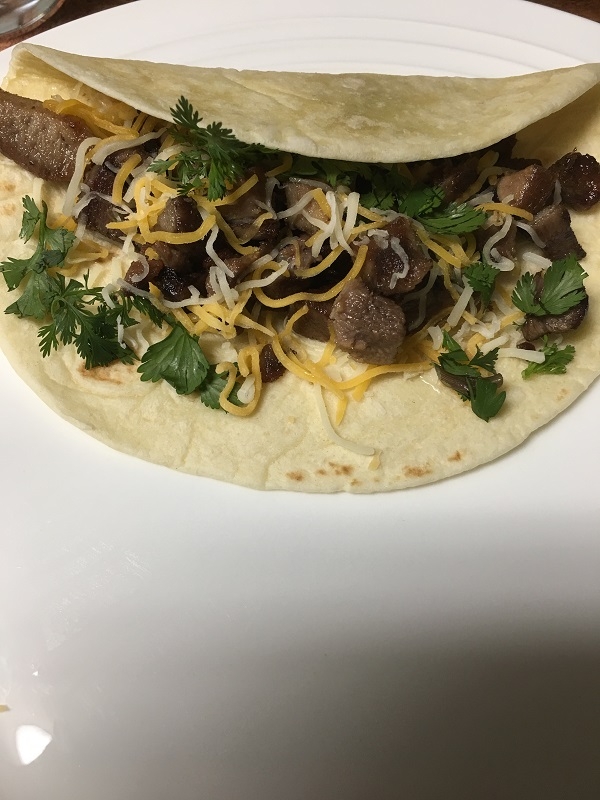 Organ meats are a new item in my house. The lead in charge of this are two unlikely suspects. Two that forever have told me to go eat my hippie foods. My husband and our daughter, Rutabaga.   Earlier this spring Rutabaga decided she liked grossing people out by eating weird things.  Her new favorite food coming from this is Lengua or Cow’s tongue tacos. Getting my hands on a Cow Tongue was harder than you think. They are one of the first things to sell when we get a cow back from Chaudry’s.  Only because we took a 2nd cow in July did I get one. And I justified it with my birthday, my  wish was to make my kiddos dream of Mama making her favorite dish come true.

Now for the cooking it is a 2 part procedure. First you will boil the tongue with the spices. Next pull out the person in your house that likes to do weird science. Step three chop & fry in a pan.  After the boiling & weird science portion you could actually slice the tongue thinly as a roast. There are limited photos in this recipe as many of you have a strong ick factor. 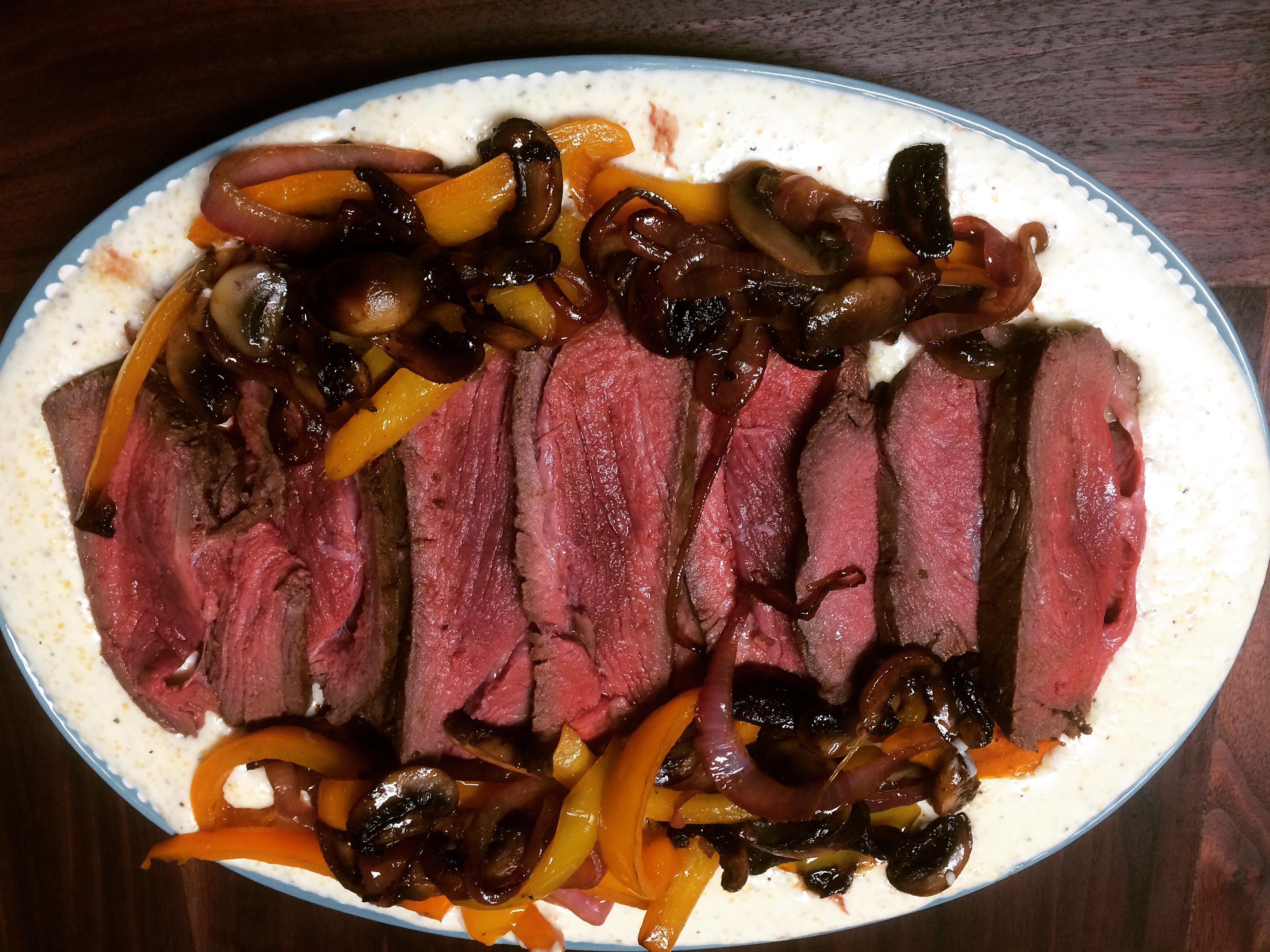 Ruth Reichl is one of my cooking icons.  When Epicurious ended I was gutted. Was her career over, would she continue to write? She is incredibly inspirational to my own cooking style. The recipe I made tonight was inspired by her. She would collect ingredients in the street markets on her way home and make a dish.  I went walking through our little market at NCF and came up with dinner.

London Broil is Flank Steak’s big brother. Have a large crowd to please? Get a London Broil. Tonight’s dinner is an indulgence, the London Broil is $10 lb and then the grits have Skyr Tykke  $5 (goat sour cream) & Garbo goat cheese $5. Our goat cheese products come from Celebrity Goat Dairy. With the veggies and stone grits this meal runs around $45.  This was our big family dinner of the week. This meal can be broken up or served with other items. The grits are a heavenly meal all on their own. Luckily we have lots of grits left over and I’m eyeing them for breakfast. There are 3 separate recipes in this one blog post. Please be patient with me. 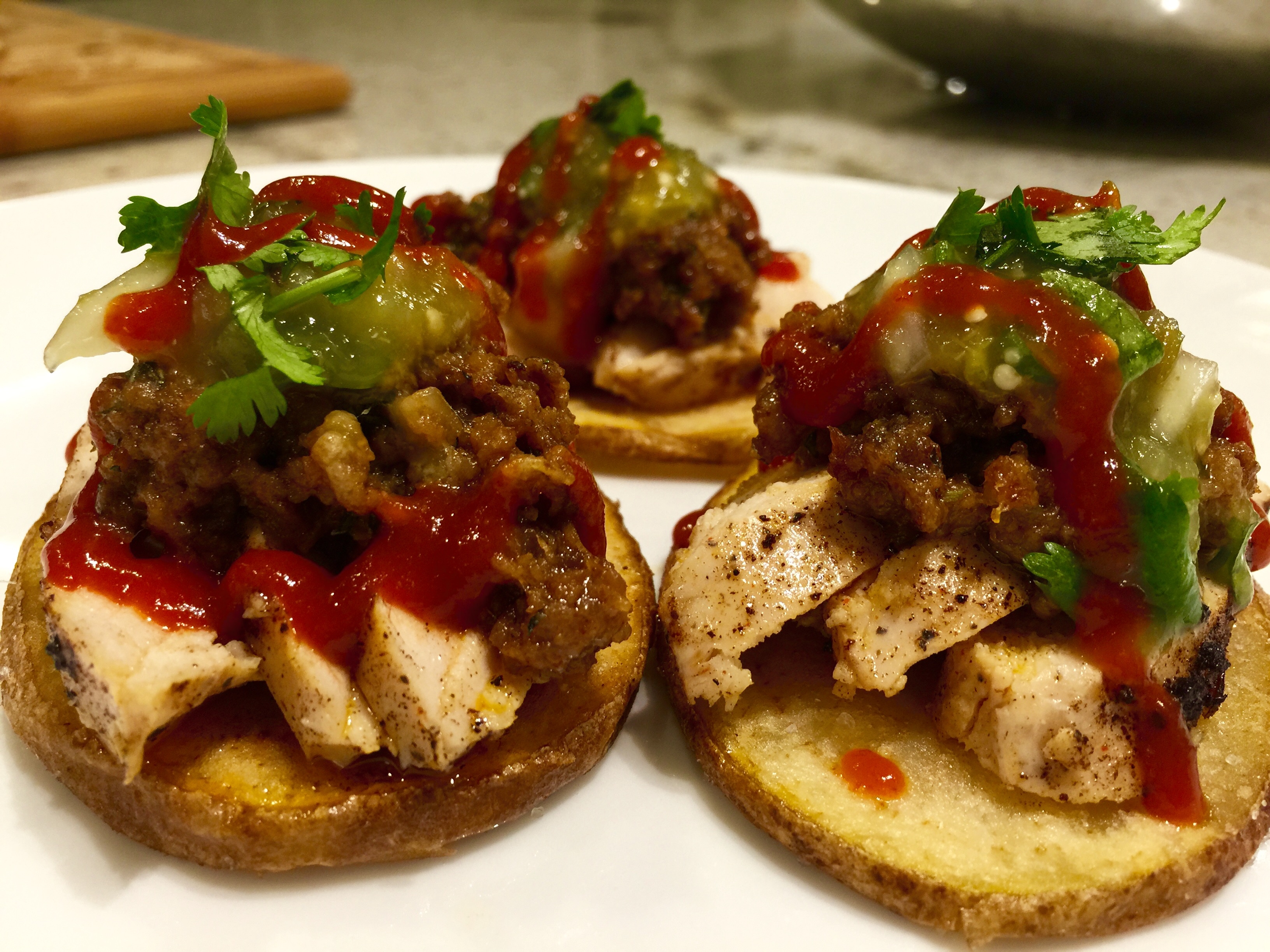 Ahh, chicken and chorizo or “chori-pollo” as I like to call it. This is a divine combination that can be served an infinite number of ways. You can serve it as tacos in corn tortillas, flour tortillas, in burritos, straight on a plate or pretty much any way that tickles your fancy. A few months back I got a deep fryer (which you should get btw if you don’t already have one) and I decided to make chori-pollo sliders on fried potato slices. These delicious morsels packed a ton of flavor and hit the spot in 30-45 minutes including preparing a homemade salsa verde. More on that in my next post.