This is going to be a multi part series about what we’ve learned, and what changes we think we’ll make as a result. I don’t know how many parts there will be to this series, I started writing just one part and it’s already obvious it will be considerably longer than that.

The results from our survey were very interesting. In my previous career I used to conduct surveys quite often, mainly as a tool to try and convince corporate that the dealers weren’t in favor of whatever hair brained idea they were planning on doing next. I’d avoided conducting surveys of our customers up until now because I figured it was too intrusive I guess. I’m not quite sure why I didn’t do it really now that I’ve done one. I really like getting the feedback.

In our survey, we asked five simple questions. We received about 50 responses from customers, plus one really nice email sent as an addendum to the survey.

The first question was to gauge who was answering the survey. We see thousands of people through here a year so it mattered if the person answering was a one time visitor who took a tour or someone who is here every week. The results were telling. 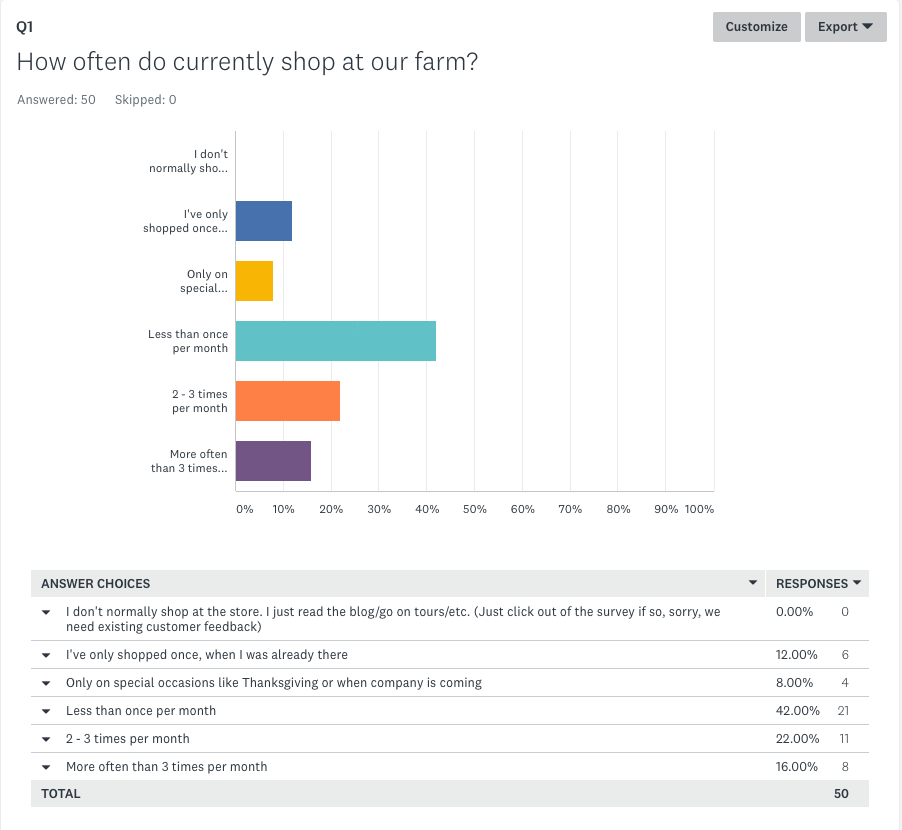 I assumed some people would take the survey who actually don’t shop here. At least, they’d start the survey so question one, answer one told them to just click out of the survey and thanks for playing. However the survey records if you skip an answer and zero were skipped. So nobody who doesn’t actually shop here even attempted the survey. Either my title was descriptive enough or they don’t read our emails anymore either. Hmm.

Also, we’ve made an effort this year to be more of a grocery store. To have complimentary items to our meats like sauces and rubs, to have milk and cheese, things like that. The largest category of customers come less than once per month so maybe every few months? Every three to four maybe? That would jive with what we see anecdotally. We see people, who RAVE about our products, but then we don’t see them again for several months. When they come back, they tell us about all the customers they’ve sent our way (which we SINCERELY appreciate) but we wonder where they’ve been all this time if they are so positive about the experience. Interesting result. It’s nice that the survey results match what we see, it tells me to pay close attention to the rest of the survey.

We also had a good group of regulars represented. It would make sense that our regulars would be interested in this survey since it affects them the most. We are paying a lot of attention to their answers as well.

This was question two. The graph and the answers couldn’t fit on one screen so I just captured the answers.

I expected that the budget issue would be a topic. We don’t sell cheap products, I know that. If I sent SWMBO to buy groceries, from her household budget, what she grabs “for free” from the store, she’d be more hesitant to purchase all the meat we use. I get it. There is a cost to raising the quality of meat we produce, everyone knows it. I certainly understand if it can’t be a daily staple for everyone.

What I didn’t expect was the quantity and the quality of the write in answers on this question. Almost 1/2 of respondents wrote in a comment.

Here are some of the standouts.

Sometimes I prefer fresh rather than frozen, especially if it’s last minute.

This is something we deal with routinely, especially from first time customers. This is a two prong issue.

One, what is fresh? Grocery store meat? It is frozen meat, that has been thawed at the grocery store and sold cold rather than frozen. Some people believe that it’s “fresh” and never frozen. That simply isn’t true. It’s been frozen, in a warehouse, a distribution center, and on a truck. It’s thawed, butchered from a primal cut to the steak you see in the case, and presented to you. And there is nothing wrong with that. But some people request that we get our meat in never frozen like they are used to getting it at the grocery store. That perception is wrong.

Two, I need steaks tonight! I think that’s what that comment is referencing. “I need to stop by on the way home, grab some steaks, and have dinner tonight. There isn’t time to thaw, prep, cook, and eat before breakfast is being served.”

This one, I totally get. Sometimes SWMBO runs into the same issue when plans go awry and she can’t do her meal prep like she wants. What she does is:

You get the idea. There are choices for dinner tonight.

Part two will continue to address the write in answers.