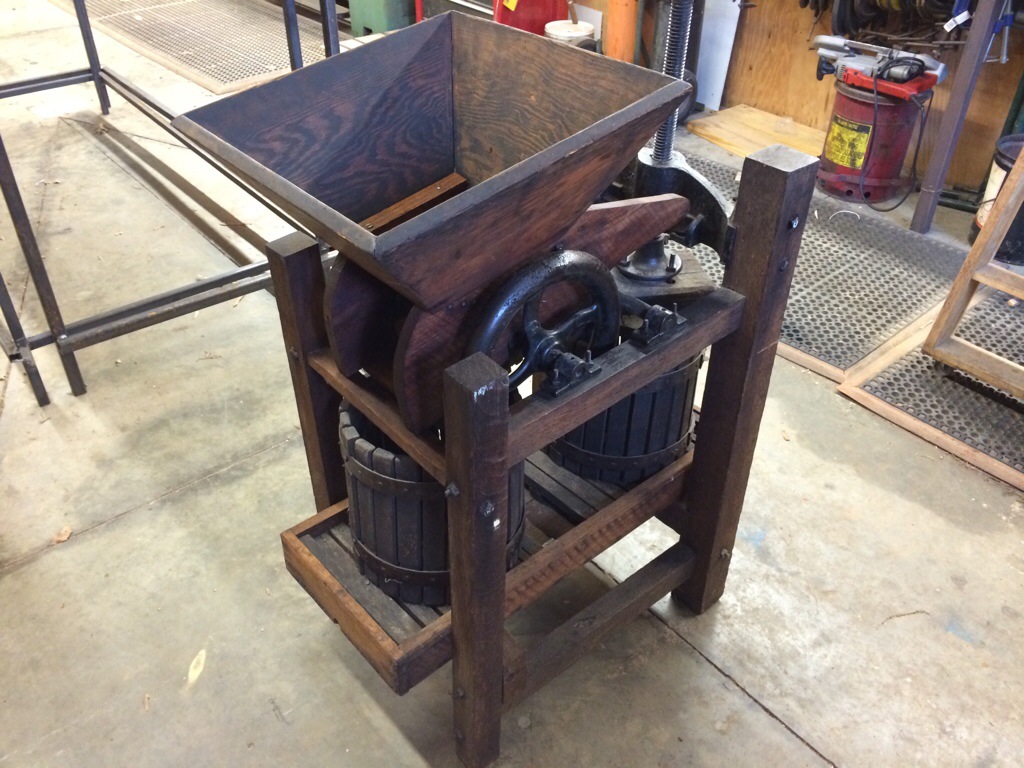 So I have a guilty habit that pretty much nobody knows about. I’m an avid fan of Wranglerstar on Youtube. Cody (Wranglerstar) is a man living in the Pacific Northwest who has a christian family homestead with his wife and son. He does a lot of interesting things that I enjoy learning about including timber framing, logging, antique tool repair, etc. Last year he happened across a really old apple press and I was very jealous of his find. You can see the beginning of the series here where he starts with the press coming home, and ends up after a series of videos with it fully rebuilt and processing apples. I thought to myself, “Self, you’d be the envy of strong men and irresistible to women if you could find a press that was half as cool as Cody’s.” Of course, that will never happen.

Fast forward a year. A few weeks ago I was lying in bed with Darling Wifey, surfing the interweb and about to go to sleep. She asked me something that caused me to go to Craigslist to find the answer. As I started to type into the search bar, I hit “A” for the beginning of whatever it was she needed and “Apple Press” popped up as the suggested search. Hmm, not very common. Sure, let’s see apple press.

One real hit comes up and it’s a doozy. I don’t know if it’s the same one that Cody has but it sure looks awful close. A few phone calls and I make arrangements to go see this apple press. When I arrive, I see the press is in pretty good shape. It turns out that this press was owned by the man’s grandfather, who purchased it sometime in the early 1900s. It was used long and hard on the farm and made a lot of apple juice. The man was selling off his grandfathers stuff, who had just passed away at 94 years of age. Our seller hadn’t had any hits on a rickety old apple press. I looked over the press and found that the wood was in really good shape. No real rot and the original Oak looked solid and strong. The baskets and drain boards could use some attention. The shaft’s pillow block bearing was worn badly and egg-shaped and the macerator had some blades missing and the drum looked beat up. None of this the man had really noticed so I was able to talk him down quite a bit on his price. However for me, all of the things I’m noting are easy enough to fix and the things I’d struggle to make all look fine. I can make most anything from wood or metal except gears so although it’s a bit of work, it’s nothing I can’t do.

The plan with this worn area is two-fold. One, the bearing has to be machined out round and true, something I’ve already done boring it out to 1″. Also the drum shaft, where it rides in the bearing, has worn irregularly and needs to be machined true and undersized. I happen to have a piece of 1″ bronze round bar so the plan is to bore out the bronze to accept the steel shaft of the drum shaft. I’ll press the bronze bushing onto the shaft, then insert the shaft and bronze bushing into the pillow block bearing where everything will run on a nice film of oil. And if anything wears now, it’ll be the bronze bushing which is replaceable.

Here you can see the entire macerator drum. I’m going to remake the wooden segmented drum and I have four macerator blades to remake. I thought the blades were hardened steel, but it turns out they are not hardened at all, making my job that much easier. The entire drum has to be disassembled, along with the fly-wheel so that the shaft can be mounted in the lathe to true up the end.

This should be a fun project with machining, wood working, and detective work to figure out how things are supposed to work. I’ll try to take pictures as we go and report back on the progress. Now if the squirrels will quit eating all my apples we’ll really have something come fall.