People ask if we do tours here at the farm. Why yes, yes we do. We see about 2000 people a year through here. Some are individuals, some are families, and some are groups such as school groups or mommy groups. However last Friday we hosted a group unlike any we’d done before.

I received an email from a lady who said she had “adults with Autism” and they wanted to take a tour. I wasn’t really sure what that meant. Autism has a broad range of people, from people I couldn’t tell had Autism to people who are non-verbal. But they’d looked at the website and knew what kind of tour we gave, so if they thought it was appropriate for their folks, it was fine with me. Plus one of our best friends has a son with Autism so it’s not like we don’t have any experience with it or a soft place for groups like this.

Friday was cool and beautiful so the weather cooperated. Everyone showed right on time. I met the group as they all piled out and got ready for the tour. The folks were extremely nice and happy to be on our little tour. As usual with any group, there was a bit of herding cats getting everyone going in the same direction but once we got going it was fine. We visited the bees, walked out to the yard where we do all of our work, saw the pigs, and came back to feed apples to the milk cows. All the while answering questions. Especially from the young lady pictured above. She really enjoyed being able to ask, “Farmer Dan?” during my ramblings. I’d stop mid-sentence, and say, “Yes?” Sometimes she’d have a question, sometimes not. When she did ask a question it was always, “What does the animal say?”. This was when we saw a new animal on the tour. Moo, oink, cluck, stuff like that. It was very cute. It was also hard to remember what I was saying sometimes but that’s not a problem. I’m used to not knowing what I’m saying so I have a lot of experience.

I’d say that I showed patience with the questions because it was routine that she’d interrupt. Like every few minutes. But the patience that the people accompanying the autistic adults showed was humbling. They not only handled everything with aplomb, they truly seemed to have a good time doing it. You could tell they loved their work and really cared for their charges. I felt kinda grumpy and hard to get along with in comparison.

After feeding the cows, which was fun and a bit of an adventure, we went back to the store where everyone met Lucy and had a chance to see our wares. Then because it was so nice, they all hung out in front of the barn and enjoyed the swings and the weather. 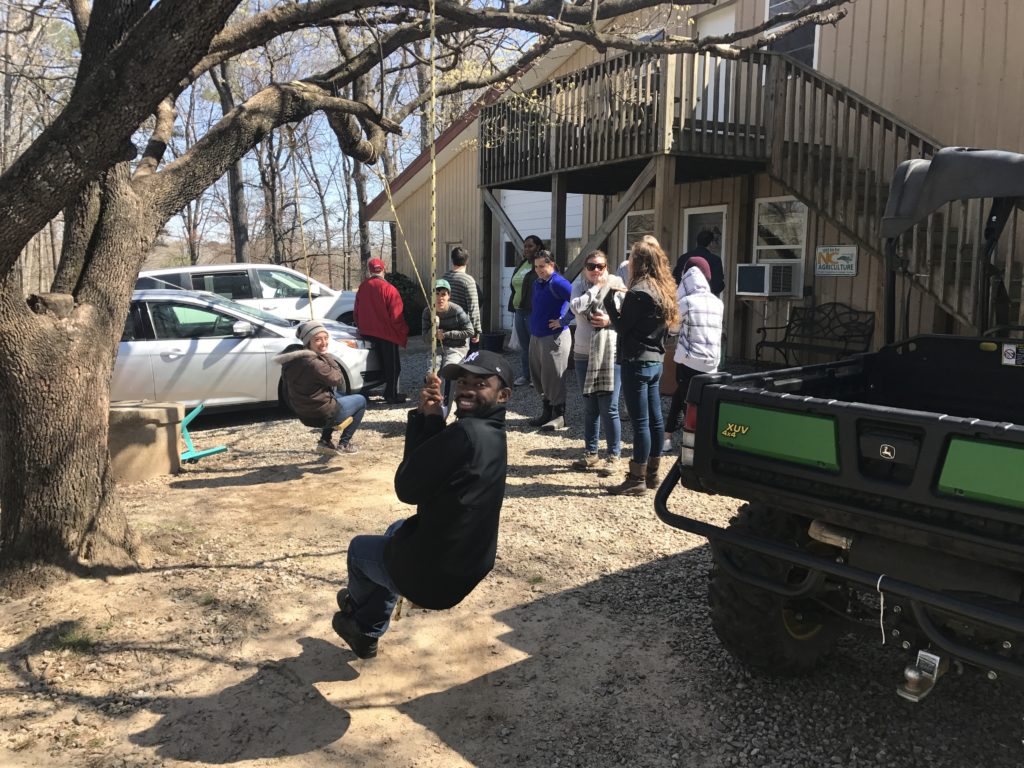 That’s where our featured picture was taken, post tour. This young man had just minutes before been brave enough to feed a cow. This was a big deal because by that point was drooling everywhere which understandably freaked him out. He’d been wearing dark sunglasses to go with his dark outfit and he had been fairly stone faced. However when I pulled out my phone to take a quick snap, he broke into the most beautiful smile and made a point to smile for the camera.

I’m married to crazy picture lady. I don’t take the pictures. But this simple smile and seeing his joy as he swung on the simple swings that my kids made one day when it was slow in the store made my day. The rest of the event was cool but this picture just summed it up. So much so that it’s taken me all week just to put this into writing.

I asked the name of the group before they left, and I’m sure I’m butchering it because I can’t remember names. I think it was the Autism Society of NC. I don’t know anything about them other than what I saw that day, but what I saw was pretty special.

3 Replies to “Special needs here on the farm”