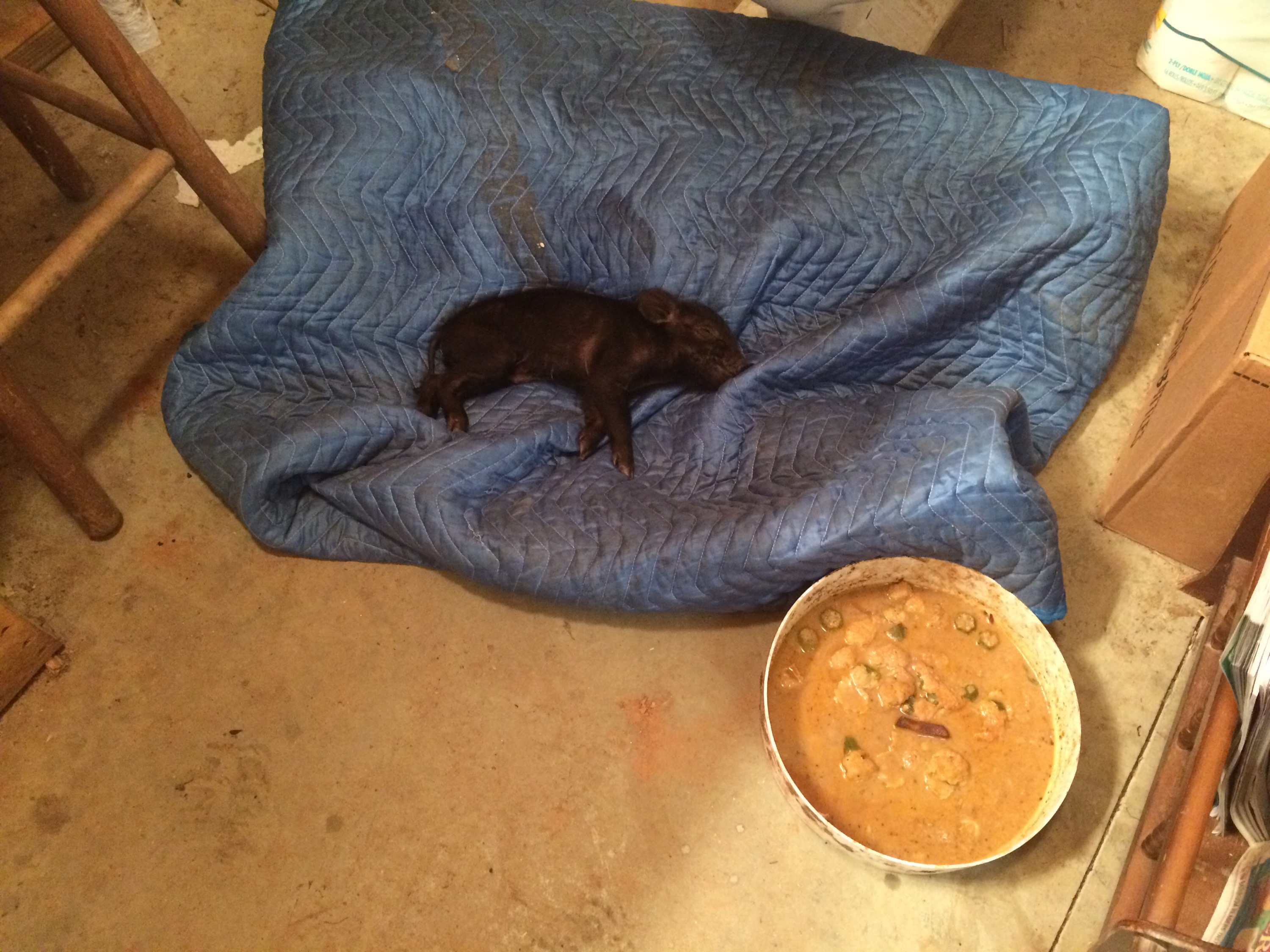 We have some new mother pigs on the farm. They are the source of the cute piglet pictures you’ve been seeing. Girl pigs that have not had their first litter yet are called gilts. Once they have had piglets, they are called sows. Being a sow isn’t an easy job and not everyone makes the transition. We have two pigs on the farm who have had litters in the past month. One had six pigs, one had four. The one who had six is a nice pig, isn’t aggressive, lets you rub her behind her ear, and had the most piglets in her first litter. She seemed to be watching out for her piglets, didn’t lay on any of them (always a concern) and also farrowed first. All in all she seemed to be a good mother. The second pig farrowed later, only had four piglets, and was more aggressive. Not terrible, just more. She didn’t like being scratched behind the ear but she was keeping her babies alive so good enough for us.

However the first pig is now down to two piglets, the latest loss the one pictured above. Her piglets are not performing well. She apparently isn’t nursing properly, and worst of all the first two piglets lost were because she ate them. We think possibly another one was eaten but there is no evidence of it. This last piglet lost is not her fault but is even more heart breaking.

The piglets have a small hole that they’ve discovered where they go outside and play. It gives mom a break and the piglets have a chance to root and forage. This one piglet had taken to wandering too far and then not coming back with his brothers and sisters. Miguel had already found him once hiding under a pallet in the barn and had put him back. He also always takes a head count of all the animals, especially the piglets each morning and evening. On our last cold day this week all the pigs were burrowed into the straw and we couldn’t get a good headcount but everyone, including mom, was happy and content. Turns out this piglet had decided to stay outside and mom was making no fuss.

Miguel found him the next day but by then he was already in bad shape from exposure. Miguel put him in our barn bathroom where we keep a heater, cranked the heat up to boiling, made some milk from formula we keep on hand, fed the piglet, then put some high calorie food in the tray you see in case he got up, and checked on him regularly. I checked him when I got home last night, and then came over first thing this morning to check him. He was gone.

We try to give the animals the best environment we can, but beyond that we don’t stop them from being who they are. Our management is based on culling and selection. This gilt has not made the transition to sow and will instead make the transition to freezer. We have good mothers on the farm who take care of their kids with no input from us and with no losses. They will be the ones we breed back. It’s hard and sad to see losses like this, but unfortunately it’s part of farming.

I will bury this little piglet once the sun comes up and then proceed about my normal day, part of which is checking on the two remaining pigs. Hopefully those two can make it to weaning.