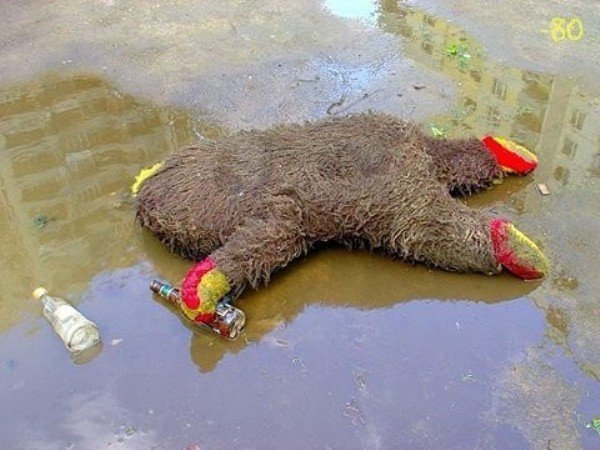 In my earlier post I guessed at how many people we’d have here for our event on Saturday. The math was based on what we knew, which wasn’t very much at all. In the end, I guessed 800 people would show. I actually felt pretty good about my guess. Maybe we’d, <gasp!>, hit 1000 but based on the buzz around our event, I felt pretty good we wouldn’t see just 50 people and have a total bust.

To put this in perspective, I think the most we’ve ever had here at the farm at once is about 75 people.

Saturday we had over 100 people  before we even officially opened at 10am.

Here is a bit of what it looked like. Thanks Dustin for the drone footage.

Before we started, I grabbed our head of parking, Joseph, and walked him through the plan for how to park cars. We had a plan A for parking that involved using the yard all the way from the barn to the back of the house. That was blown by about 10:10. Plan B went into effect, which was to park cars behind the house in the orchard. That lasted another 15 – 20 minutes maybe.  Plan C was to park right behind the house between the grape vines and the house. That petered out by about 11am. At that point, we went into our emergency planning mode, which was to shift our parking people to the bottom of the hill and start parking in Dustin’s yard. We made that transition, which was definitely under duress.

Luckily shortly after that plan went into effect, Miguel made it back to the farm and asked about parking in the big pasture. We didn’t want people parking in the pasture because it messed up the flow of people to the tours. Basically it had people coming from all sorts of directions and people wouldn’t be able to work their way through out stations without getting lost and/or confused about what was going on but at this point we didn’t have a choice. With his help we quickly shifted to parking cars in our main pasture. This plan, frankly, wasn’t part of the plan. At this point we were making things up and the cars kept coming.

Luckily about noon the rush was over. Our initial visitors were starting to clear out and we were able to start making progress towards parking in our normal areas. However it was well into the afternoon before we cleared the parking in the big pasture. All other spots were swamped all day.

I mention the parking because it really is our Achilles heel. We can only park so many people here on the farm. We have a one way road on and off the farm, and we had a stead stream of people pouring in.

I spent most of my time either giving tours, checking on our vendors, or bouncing from hotspot to hotspot. There was no such thing as stopping, for me, or anyone else all day.

We had everyone from our farm working, including their children and our children. We also had folks from our leased farm, friends from school, customers who pitched in, and pretty much anyone else we could think of. Despite all that, we were simply swamped. When we started this, we hoped we’d get maybe 100 people.

We did 207 transactions in the store on Saturday. A normal Saturday is 30-50. If you figure each transaction represents a family of 5 that means we had 1035 “people” through the store. One of our vendors told us about noon he’d already counted 1000 people who’d come past him. This was two hours in! So that number seems legit.

Except we had a line out the door ALL DAY. We only have one point of sale system.

We can only ring people out so fast. (We are already working on this for next time.) Many people didn’t want to wait 30-45 minutes to go into the store and I don’t blame them. People said they’d come back another time. 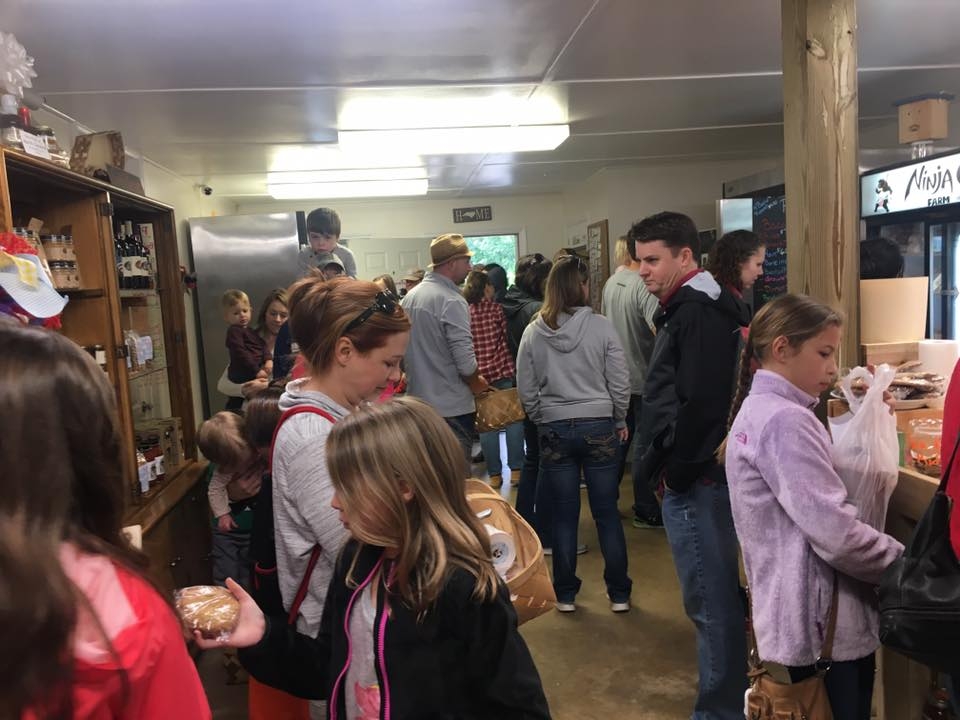 It’s not a big stretch to assume that if 1035 people were represented in our store, that at least that many decided not to wait in line. That puts us over 2000 people for our barn day. Two THOUSAND people at our little farm. We only have 1300 likes on Facebook currently and we had over 2000 physically present! So this is what it means to “go viral.”

And now, some pics from our day.

I’ve never seen a chicken on a leash before. Even I learned something.

We gave tours every half hour, alternating between Spork and I. I’d say we had an average of 50 people per tour. Everyone seemed to enjoy their walk through the farm and we had lots of good questions.

Buh not only grilled samples all day, he also made our dinner for the after party!

2000+ people, no accidents, no fights, no police called, nothing caught on fire.

It was pretty much impossible to really be prepared for an event to get this big this quickly. But with the hard work and help of the Clarks, the Deatons, our friends from school, all of our suppliers, Tamryn, our own family, the guys who work here on the farm every day, and of course Grandma we pulled it off with no major blowups. I’m still torn on the propriety of doing this type of an event. I know people got lost in the crowd. I know people will overcook their steaks because I didn’t get to give them one on one instructions. But we had so many positive comments and people who stopped by for the first time because of the event that we definitely did some good as well.

We’ll see. Till then, thank you everyone who worked, attended, or told your friends about us. We had an awesome day.

8 Replies to “The results are in…”