The wetness you see above is from all the washing we did. Lidocain has epinephrine in it (remember the epi-pen scandal in the news recently? Same stuff.) and epinephrine restricts bleeding. There was actually very little blood through this entire thing. 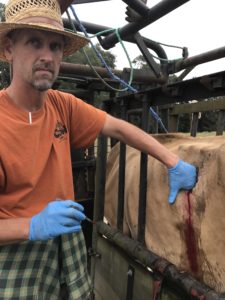 At this point, we were deciding if we’d actually open her up, or just put a trocar in and get direct access to the rumen. That look on my face isn’t grumpy, it’s thoughtful. Sadly for my wife, kids, and employees, it’s hard to tell the difference.

Her rumen felt like one of those sand filled stress balls. It was packed with something that obviously wasn’t going anywhere. The best thing to do was to open her rumen and get it out. At this point, you’re probably thinking, “How does he know how to do all this?”

Folks, I don’t. Yes I’ve done surgery before. Yes I’ve worked on cows before. Yes I have experience. But I’ve never done the procedure I was about to try. Can it be done? Sure. Do I know how? Technically, yes. However, it boiled down to this. I can not do this procedure, and she can die. Or I can do it, and she quite likely may die anyway. But she wasn’t in pain from my surgery and I could at least try. That gives her a chance.

I opened the incision wider, enough to get my hand inside, and then proceeded to open her rumen. Once inside, I found it was packed full of grass. The grass actually looked perfectly fine. What had happened was something had stopped her gut from working, probably a change in diet. The grass just backed up in there and wasn’t going anywhere. A cows digests its food by bacteria that live in its gut. Her bacteria had died off, and she was literally starving to death with a belly full of food. I know how this works, because it has happened on our farm before. Changes in diet are very dangerous to cows. I remember loosing 8 cows one time when I was a teenager, all from changing their diet too quickly.

For the next 45 minutes, I reached in, got a handful of grass and gut contents, and then tossed it on the ground. The poor girl had done everything she could to eat, but it all had to come out.

This is less than half what we pulled out of her. I ended up elbow deep in her rumen, which if you are paying attention, you’ll note that my gloves don’t go quite that far. Fun day.

After getting all the gut contents out, I spent some time checking for obstructions that could have started all this. Erin, our resident veterinary technician and I had some conversation about the exit of the rumen and how the plumbing works. We had shoulder length exam gloves and she offered to go up the exit pipe and see if our hands meet in the middle. You have to love gallows humor.

Once everything was clean and clear, it was time to sew her up.

The dangly bit to the left of the picture is the rumen, now deflated and empty. Step one was we had to sew up the rumen.

I had to pull the rumen out enough for Erin to sew up the hole we’d made. We had enough room, barely. Erin did a great job sewing her up. Especially considering the degree of difficulty. No not the cow, she was a stellar patient. I was giving Erin no end of a hard time the entire procedure. Compound that with wearing pearls while doing cow surgery. She was a good sport.

Now, on to the trocar. But that’s the next post.