I was reading the Stockman Grass Farmer and the editor was writing about how nice a Uruguayan grill was for properly cooking steak. There were no pictures of one in the article but Google solved that for me quickly.

Here you can see what I found on Google.

Note that there is a firewood holder on the left, then an angled grill with easy access on the right. The way it works is you make a fire with firewood, then shovel out the coals from underneath and place them under the grill. You can adjust your heat by how much and where the coals are under the grill and also by where the food is placed on the angle, adjusting your grilling height at the same time. We are in the process of designing an outdoor patio with a fire pit to go directly in front of our kitchen. There is no landscaping there and it looks pretty ragged so the patio fixes the eyesore and allows for a casual entertaining area directly off of the kitchen. It was SWMBO’s idea and she’s had to convince me to do it. But now I have the idea of this wood fired grill so we can have a combo fire pit and grill. I can be on board with this.

Not so fast says SWMBO. You don’t use the grill we have now and you have no idea if the crazy South American thing you’ve cooked up will even work. If you think its a good idea, go mock one up in that shop of yours and let’s try it out a few times before it becomes part of the design.

Darn. I hate it when she’s right. Oh well, off to the shop I go. 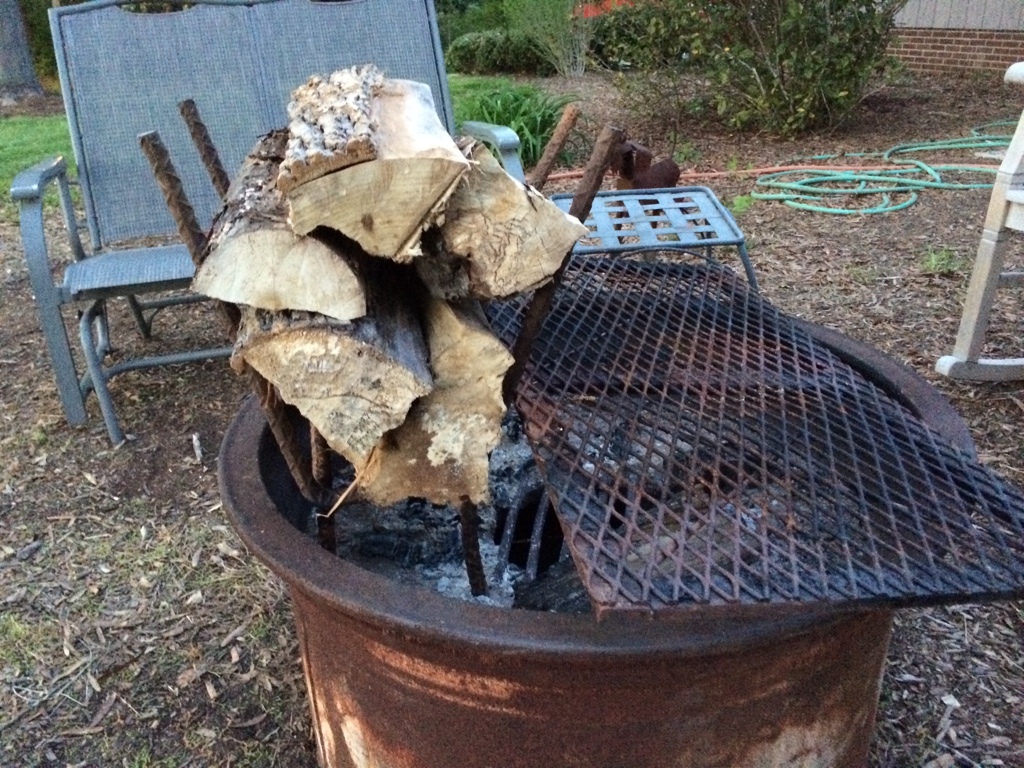 Here you see my mock up. I think I spent about 20 minutes on it. 3/4″ rebar that was left over from when my father built the house 32 years ago. I found it in the woods about 5 years ago. I bent two uprights in the press, then welded them together and onto some legs. Two nails welded to the sides and the grill from the old grill leaned against the nails to create the angle. The grill is turned the wrong way and the access isn’t nearly as good as on the real thing but I have zero dollars invested and its good enough to try it out. I put the entire thing into our existing mocked up fire pit which is a skidder rim cut in half surrounded by lawn chairs we already had.

Now to try it out. I will let you know how it goes.

2 Replies to “Uruguayan grill for our outdoor firepit”