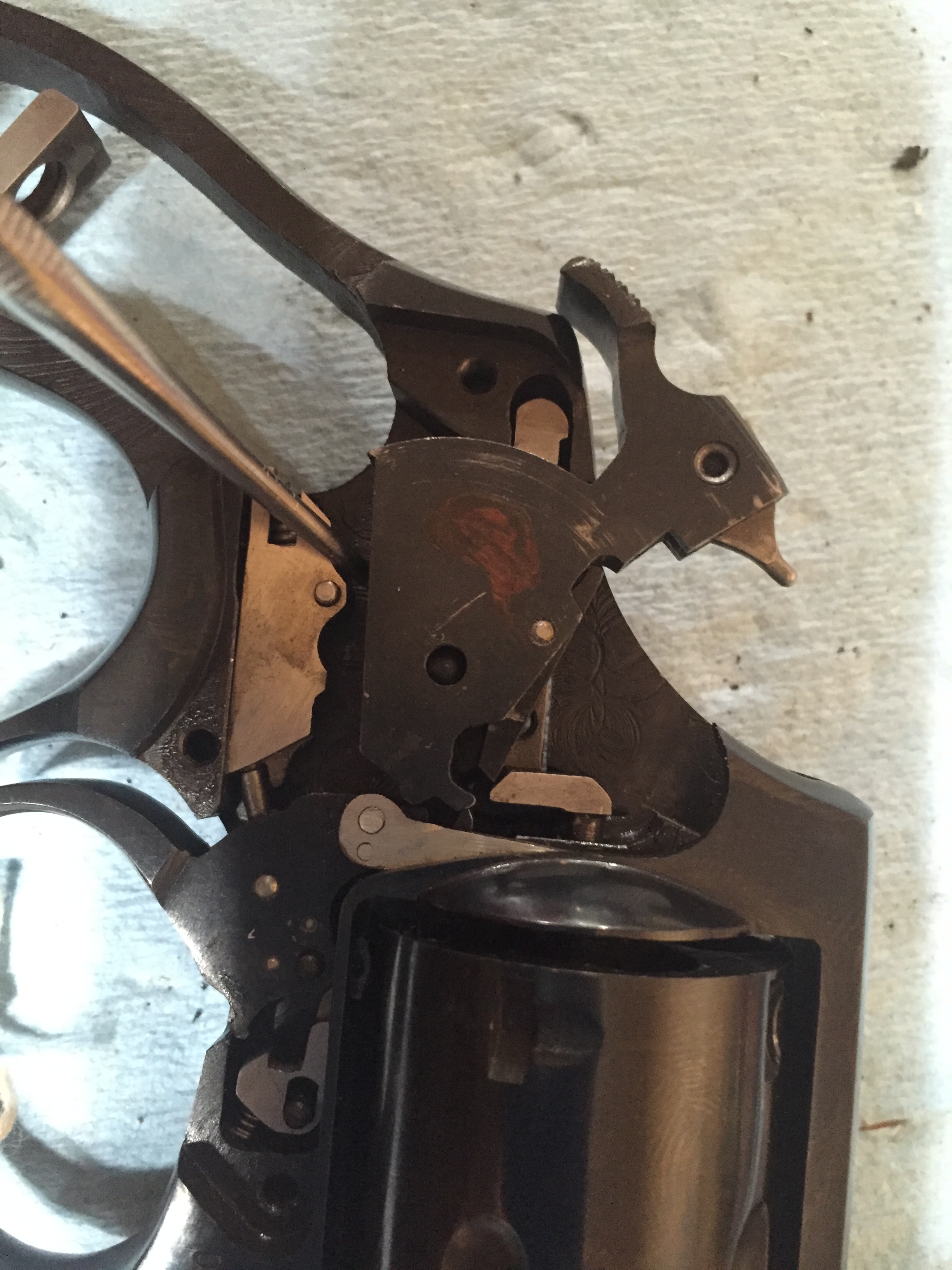 I had an interesting job come in the shop this week. A small Rossi .38 was jammed with the cylinder unable to open.

I told the customer that I’d be a few weeks before I could get to this pistol but then I ended up with a few hours where I couldn’t leave, and I didn’t have enough time to start any of my other work so this pistol was a perfect job to tackle in that time.

Plus, this customer’s father flew B-26 Marauders in World War II. My father was a gunner on B-17s so I felt some kinship there.

From the telephone description of what had happened, I’d assumed that the gun had jammed with bullets still in it. Working on something with live rounds in it is never a fun day. Fortunately this one showed up empty and fully functional, except it wouldn’t open.

The Rossi has an easy to remove side plate so access is excellent to all the working parts.

Once the side plate was off and a few fiddly bits were removed, I verified that there was no foreign material in the works jamming things up. The gun worked flawlessly, except it wouldn’t open the cylinder. So I removed the hammer spring and the hammer to fully reveal the transfer bar that releases the cylinder.

Once it was exposed I could get full access to it and make it move, or remove it entirely. Even with full force against the bar directly on the pin, it still wouldn’t move. Since it was obvious by this point that something was gumming up the pin that slides through the frame, I decided I’d give it a love tap prior to removing it. A couple of taps with the brass hammer and viola! It moved allowing me to swing the cylinder open.

Once exposed, I could see the problem, there was a bit of rust on the pin in an area where there is very little clearance. That rust has jammed the pin into the frame and that was the issue. There was another spot on the inner workings that showed a small sign of rust as well so the best thing to do was to put the whole thing into the ultrasonic tank and give it a spa day.

I ran the cleaner for about 15 minutes then pulled the gun, blew it out, and returned it to the lube tank. By this point my extra time was up so I left it in the lube tank the rest of the day and returned that evening to put the gun back together. Everything worked perfectly now, and the gun was as clean as new and lubed everywhere after it’s bath. After blowing all the excess lube out, I put grease on all the bits that needed it and reassembled everything.

This was my kind of repair. No parts to order. No waiting on UPS. No keeping up with all the tiny bits till the new part comes in. No craziness of something super complicated. Just a happy customer who gets his gun back earlier than he thought.